Pretty In Pink At The Farm Chicks Campout 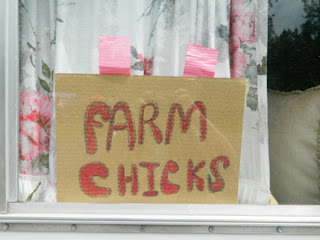 Leaving no doubt as to her objective, Miss Elaine brought her trailer all the way from California to Spokane, Washington, to camp in conjunction with the Farm Chicks Antique Show. 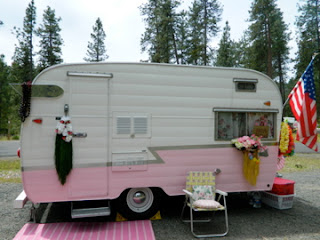 You can just about imagine the attention she must have gotten with this pink and white Shasta in tow across three states. 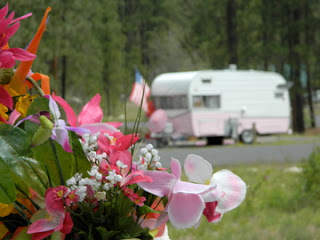 The trailer made a lovely centerpiece at the campground, too. 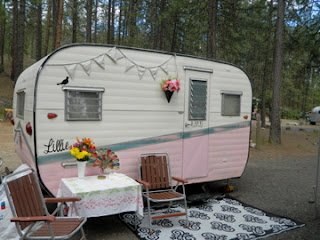 Here's another trailer treasure in pink and white. I didn't get to meet her owner; no one was home. 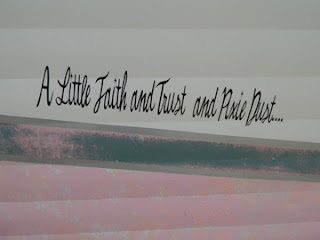 I love what's written on the side...and the fact that the pink paint is allowed to show through the silver bar. 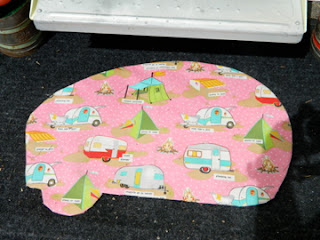 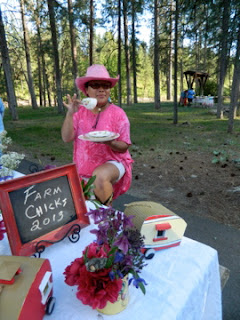 People are pretty in pink, too! Here's Miss Jasmine with one of the 40 china place settings she brought with her for our potluck table. This was her first campout with the girl-gang, and I must say: She seems to have been born to it!

Next time: Creative ideas from the Farm Chicks flock.
Posted by Girl Camping Girl at 6:36 AM 2 comments:

Galloping In For the 2013 Farm Chicks Campout 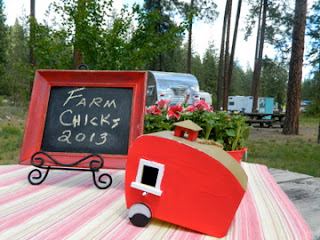 In Spokane, Washington, the first weekend of June is set aside for the massive and insanely popular Farm Chicks Antique Show at the Spokane Interstate Fairgrounds.

Since 2009, some of the area's glampinistas also have taken over Riverside State Park, nearby, in order to camp together, go to the antique show, and get in some excellent girl time. Among the attendees, 'Farm Chicks' means the campout as much as it does the antique show. (Probably a copyright infringement, although it's guaranteed that Farm Chicks, the show, benefits immensely from the shopping dollars we spend while camping in its name!) 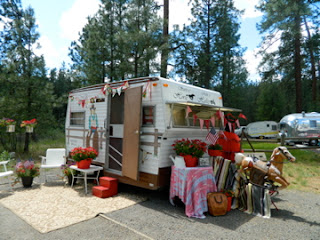 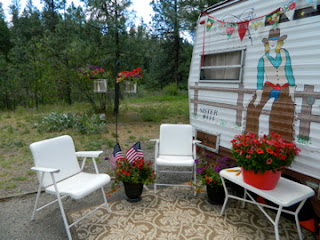 Because I would be helping to decorate our common meal area, and also because flowers make me happy, I brought along potted plants and cut flowers from home. They stayed at my campsite when not doing their other duty. 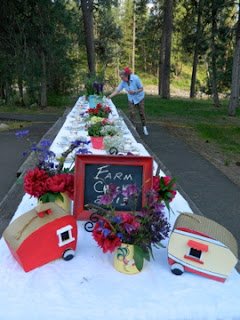 Here they are as adornments for the LONG dinner table set for the first night's potluck dinner. 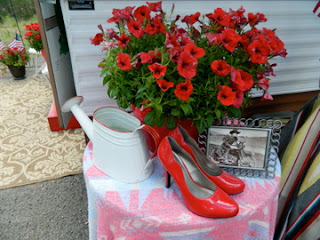 Red petunias rock the red party shoes, or maybe it's the other way around. (The Prince Charming next to the red Cinderella shoes is vintage Hollywood cowboy Tom Mix, riding his iron pony.) 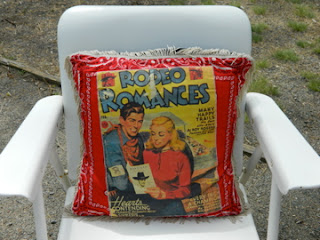 Women traveled from several states to join in on our campout. One, who came from California, came over to my campsite with this pillow. She'd given it a ride all the way from a trailer rally in Pismo Beach, where a friend had seen it, thought of and bought it for me, and sent it along to Washington.( Is that not cool? Marcie and Elaine, you're the best.) 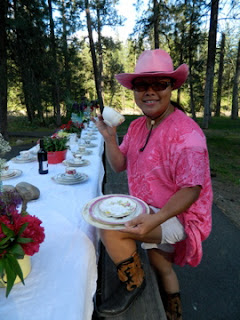 So much went on over four days that I can't begin to get it all in one post. (This is Miss Jasmine, who surprised us all--on her first time to join in--by bringing and setting out 40 place settings of vintage china that she'd brought all the way from Seattle. WOW! This was one time when we did not mind doing dishes in the woods.)

Since one post won't do, there will, of course, have to be more. So come back soon, or better yet, subscribe. You'll get to see more of what had one park user asking, 'Who ARE you people, anyway?!' 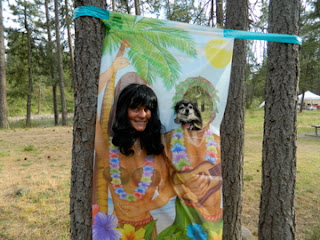 The Free Trailer Is Now My Science Project 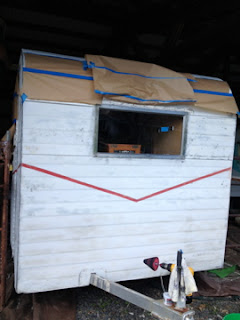 The free trailer from Mr. Frank (see earlier post) is now running a tab. I'm giving her an exterior rehab, including new seals and paint, and am undertaking it as a science project.

In other words, I'm learning how to do this as I go.

The trailer is a 1961 Aloha compact--small, and fairly uncomplicated in how it's put together. Nevertheless, I won't say I didn't start out feeling a little intimidated at the thought of taking things apart. But that ended pretty quickly as soon as I got my hands on the first power tool. I also was able to hire a part-time helper, 'Randyman,' and he keeps things moving along when I have to be at work. 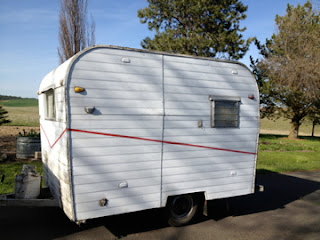 The first thing we had to do was get the old sealant paint off the roof (it was peeling up in hunks) and off the trim rail. It had been put on so thick that you could barely see the grooves in the trim-rail screw heads, so there was no way to get the trim rail off until the paint was removed. Even with power tools, these are time-consuming jobs. 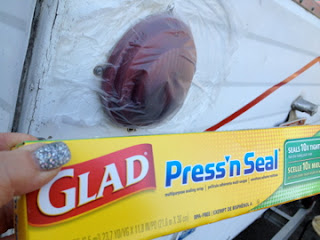 The roof came clean with a heat gun and a scraper. For the trim rail, I used a wire wheel at the end of a power drill to clean the screw heads and get the trim rail free enough of old goo that I could get it off. The wire wheel spit out millions of tiny bits that infiltrated everything. I hadn't taken the light fixtures off yet, so I covered them up with Press'n Seal from the kitchen drawer. No sense doing any more cleaning than I already had to do.

These two jobs--cleaning the roof and getting the heavily coated trim ready to take off--each took about 10 hours of persistence, divided up over several days. 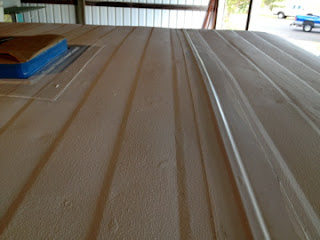 The next step for the roof went fast, comparatively speaking. We took the vent out, cleaned it up, and put it back on over new putty tape. Then we used EternaBond roof seal tape over the long top seams (there are two on this trailer). The vinyl tape comes in a roll. We measured and cut, centered the tape over a seam, peeled off the backing, and pressed it down tight with a wallpaper roller. We sealed the edges of the vent with the same tape.

Then we used a long-handle paint roller to apply Elastomeric roof paint to the rest of the surface. This product is weather resistant, reflects heat, holds up under heat and cold,  and is flexible to RV movement. We did a north-south coat, then an east-west coat, per instructions. 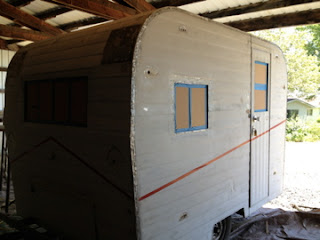 Next, we took off all the trim and the light fixtures, removed the windows, and covered the openings with cardboard and painter's tape. Randyman got busy with a light sanding of the surface, while I applied paint stripper to the trim rail once it was off the trailer.

Once the stripper had loosened the paint on the trim rail, I went to work on getting it off, first with an electric tool called a Wagner Paint Eater (awesome tool) and then with a Dremel tip. I had to be careful not to bend or twist the loose aluminum rail, and even with the Paint Eater, this was a tedious and messy job that took hours. Along with old paint, every tiny bit of old silicone had to be located and ground off (it just laughed at stripper), even around the pilot holes for the new screws.

Today, the trailer gets washed down with TSP (trisodium phosphate), which removes grime, grease, and fingerprints. Then she'll be ready to prime and paint.  Randy will do that part and I'll be cleaning and polishing the windows and the drip-cap rails with aluminum polish and a buffer. 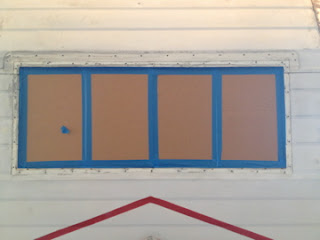 In case you're wondering, it's taken about 40 hours of labor to get the trailer to this point of being nearly ready for painting. Had the trim rail not been encased in layers of paint, silicone, and roof coating, the time would have been about half that. Considering the labor involved, new trim would have been cheaper....but like I said, this is a science project!

The Free Trailer, Transformed by Decor (Also Known as 'Shopping the House') 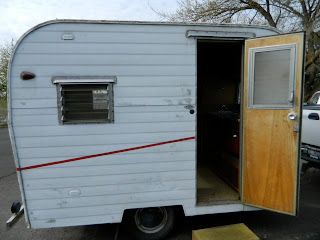 This is the 1961 Aloha compact that came my way, free, through a piece of good fortune. She had not been used in about 15 years, and is now undergoing the necessary rehab/maintenance to make her shine again.

But before I turned her into a shop project, I couldn't resist dolling her up a little, and making her comfy enough for a few nights' stay out in our yard. There's no better way to get to know a trailer before you get serious about the rehab.

The interim project called for an episode of Shop the House. 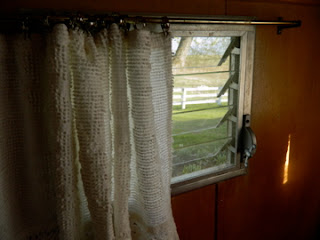 I found of set of trailer-sized curtains, sewn of vintage white chenille. I'd gotten these earlier from someone who wasn't using them anymore. They fit the windows perfectly. (It's amazing what curtains alone will do to create a sense of home in an old trailer, and with sliding clip rings, you make them instantly out of just about anything.) 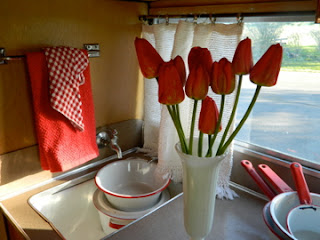 I'd recently purchased some red and white enamelware, a small kitchen's worth, and the small red and white trailer is the perfect place for it.

The red tulips were a no-brainer--they were blooming in the garden at the time. 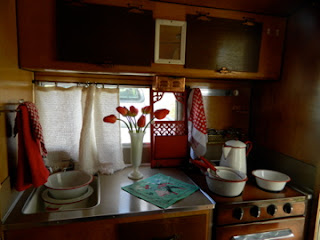 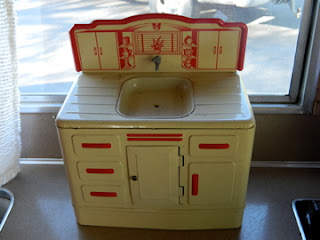 The tin toy sink and drainboard, from the '50s, found a perfect home on the trailer's small counter. It was down in our basement, with some other old toys. 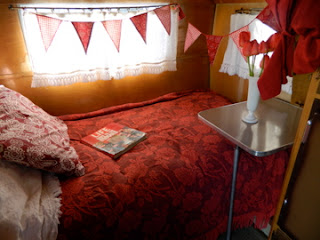 By now, it was obvious that the trailer wanted to be red and white throughout. All these other R/W items were lurking in various closets and cubbies--even 'Life Goes to the Movies," from the '60s. The trailer needs little to make it charming and comfy, and that's good, because it isn't very big and would be cramped if overloaded with 'stuff.' 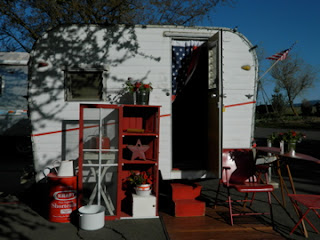 Outside: More red flowers, some small furniture, including the red and white screened cupboard, and her personality popped right out. 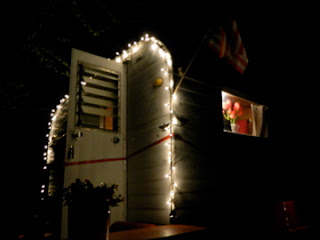 Then she got sassy, and demanded lights! She's just the right size for the 20-foot string.

After the fun, we're back to the dirty work, preparing to reseal and repaint. I like her in white, with a single red stripe, so I'm keeping that.

Oh, and I decided to name her Karma.