One of the Trailers I Didn't Buy (and Why)

Yesterday, I took the opportunity to go look at a 1960s camp trailer advertised for sale. It was one you might have called on yourself, were you in the market.

It had a cute profile, with a front kitchen and original aqua appliances. The original upholstery still looked great. No dents in the body, and the paint didn't look too bad. I'd already spoken to the owner, who described the trailer as ready to go camping.

'No water damage,' he said when I asked. 'Just look at the vent photo in my ad.' (It appeared pristine.) 'New tires, too,' he added. "Not even 50 miles on them.' He also possessed the No. 1 item that I insist upon: the trailer's title, valid and in his name.

The drive to see the trailer took pretty close to 3 hours. It took less than 3 minutes for me to decide I would not be buying it.

I snapped these few quick photos that will help explain why. 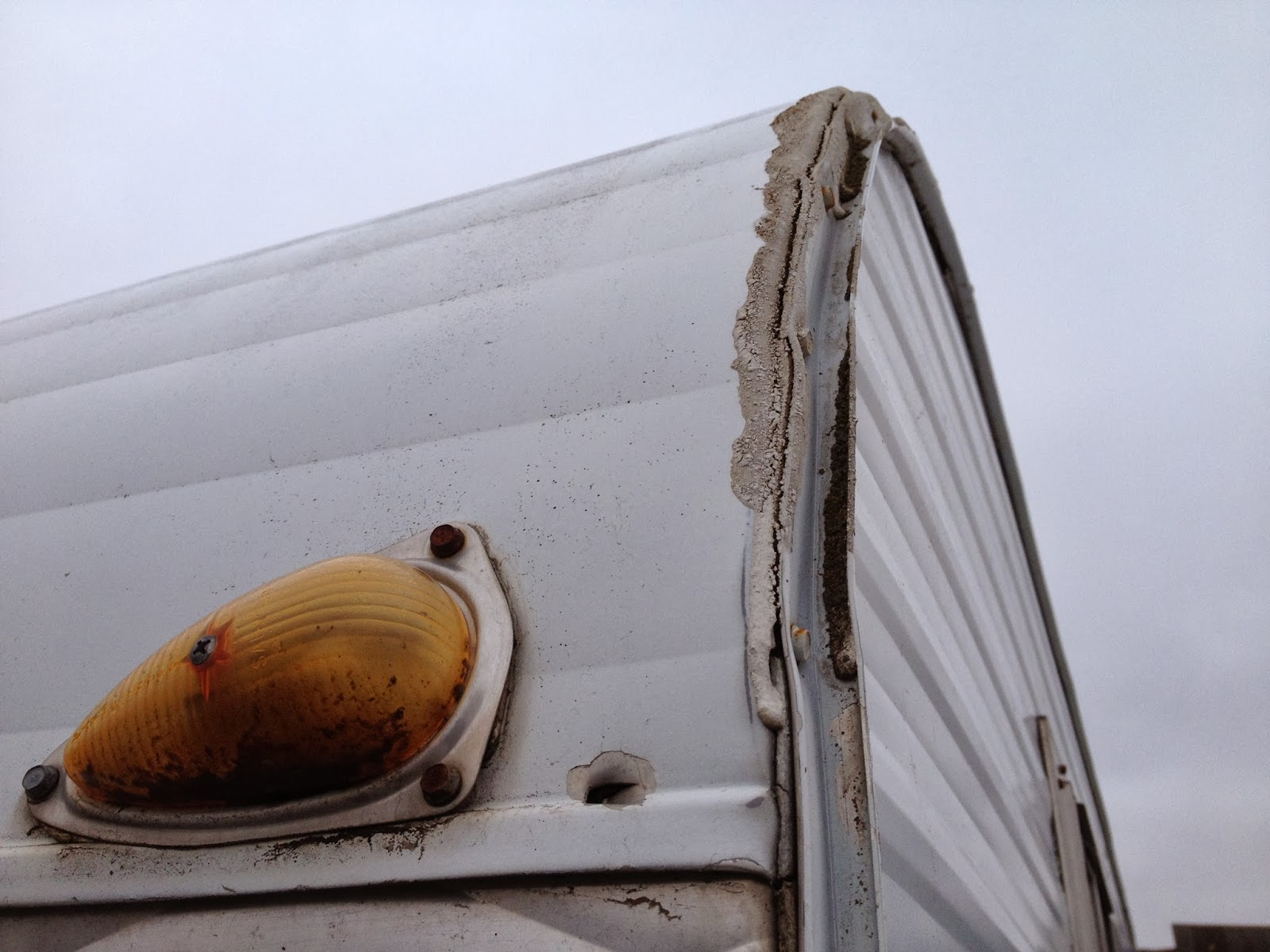 Strike 1:
I pulled up alongside the trailer and this caulked (but dried-out and cracked) corner was the first thing to meet my eye. 'This has leaked before and is most likely leaking now,' I thought. I also noted what seemed to be a small break in the skin, just to the right of the light cover. With every rain, water will have gotten inside, between the skin and interior paneling. 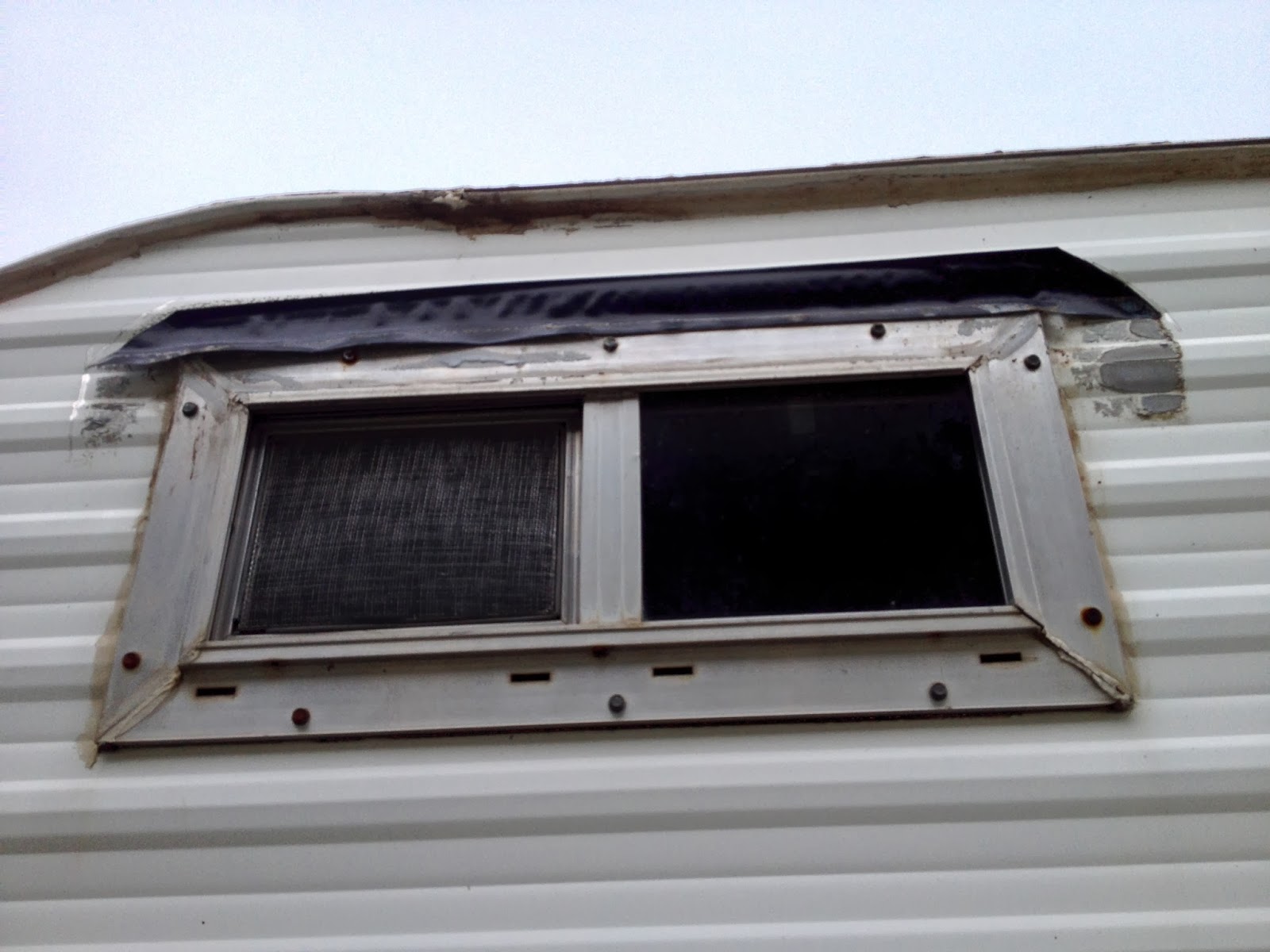 Strike 2:
Around the trailer on the curb side, the metal rain rail, or eyebrow, was missing over a window. In its place was a length of black tape. The tape wouldn't have kept water out for long, meaning there would very likely be more to fix than just a missing rain rail. Water, trapped behind a wall, sets up a perfect environment for frame rot.

Strike 3:
All the tires, including the spare, were car radials rather than STs (tires specifically made for trailers). And, even with little mileage, they didn't qualify as new; the date code showed them as made in 2006. That meant they'd been sitting out in the weather, quietly breaking down, for nearly 10 years. For safe road use, this trailer would need a fresh and correct set of tires. (Note: You can pretty much figure that almost any older trailer you buy will need new tires. But if an ad says 'new tires,' don't take the claim at face value--look those tires over for yourself.)

Furthermore:
The pull-out step beneath the entry door was missing, and the rear bumper was bent on the curb side. As both these 'injuries' were on the same side, my guess is that the trailer got hung up somewhere, on something, while being towed, tearing off the step and bending back the bumper.

I didn't have to go inside to know that I'd be passing on this trailer. Too much 'not good' had added up already for me to want to take it on.

But, as long as I was there, I did go in (of course--who can resist an open trailer door?). The aqua appliances were darling, and on their own, would have swept many a gal right off her feet. The interior was clean, with a nice new rug at the front door. 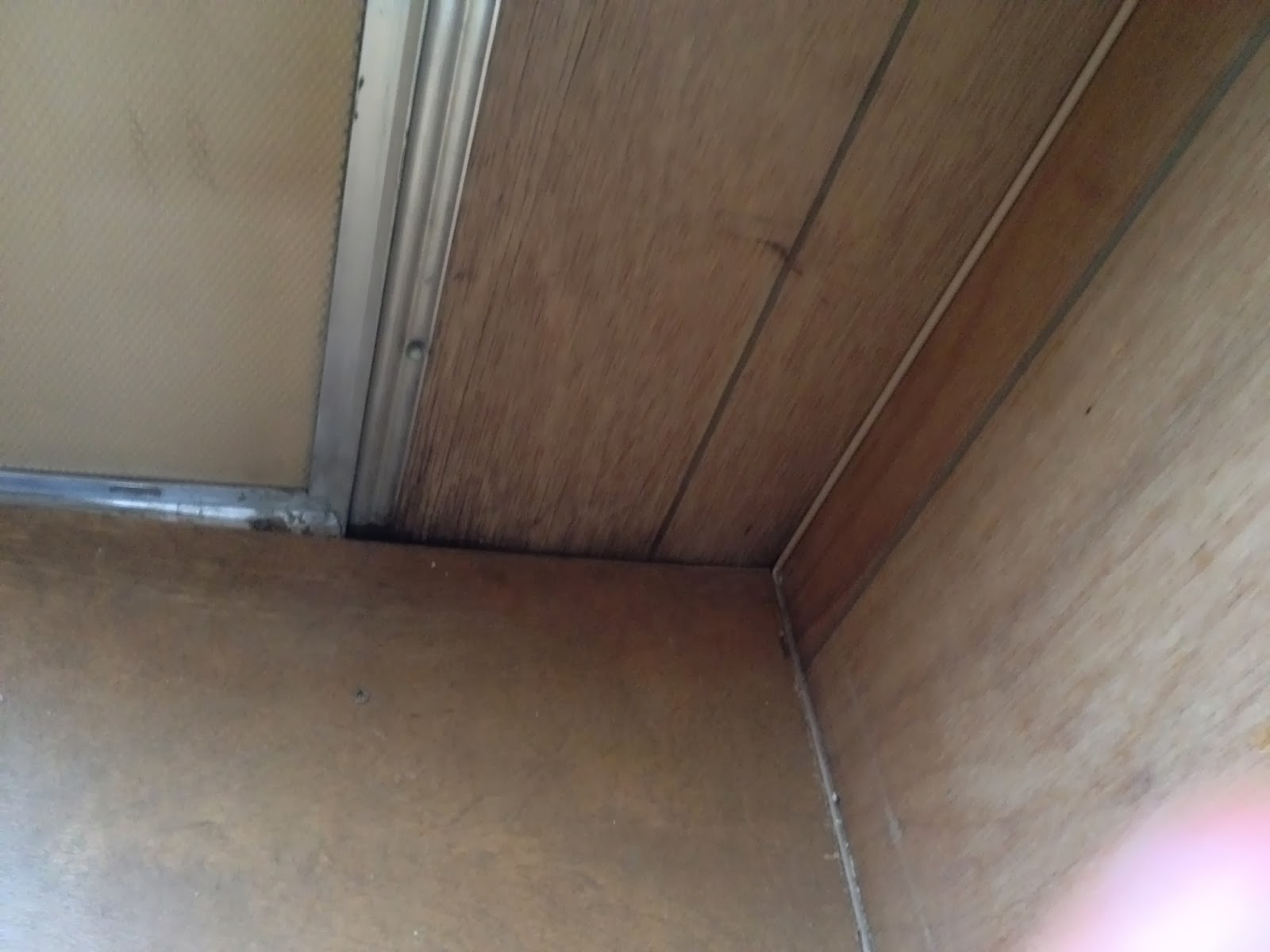 I lifted the rug, and there was a new part under it, too--where a piece of faux wood had been tacked down over the original flooring in order to firm up a soft spot. 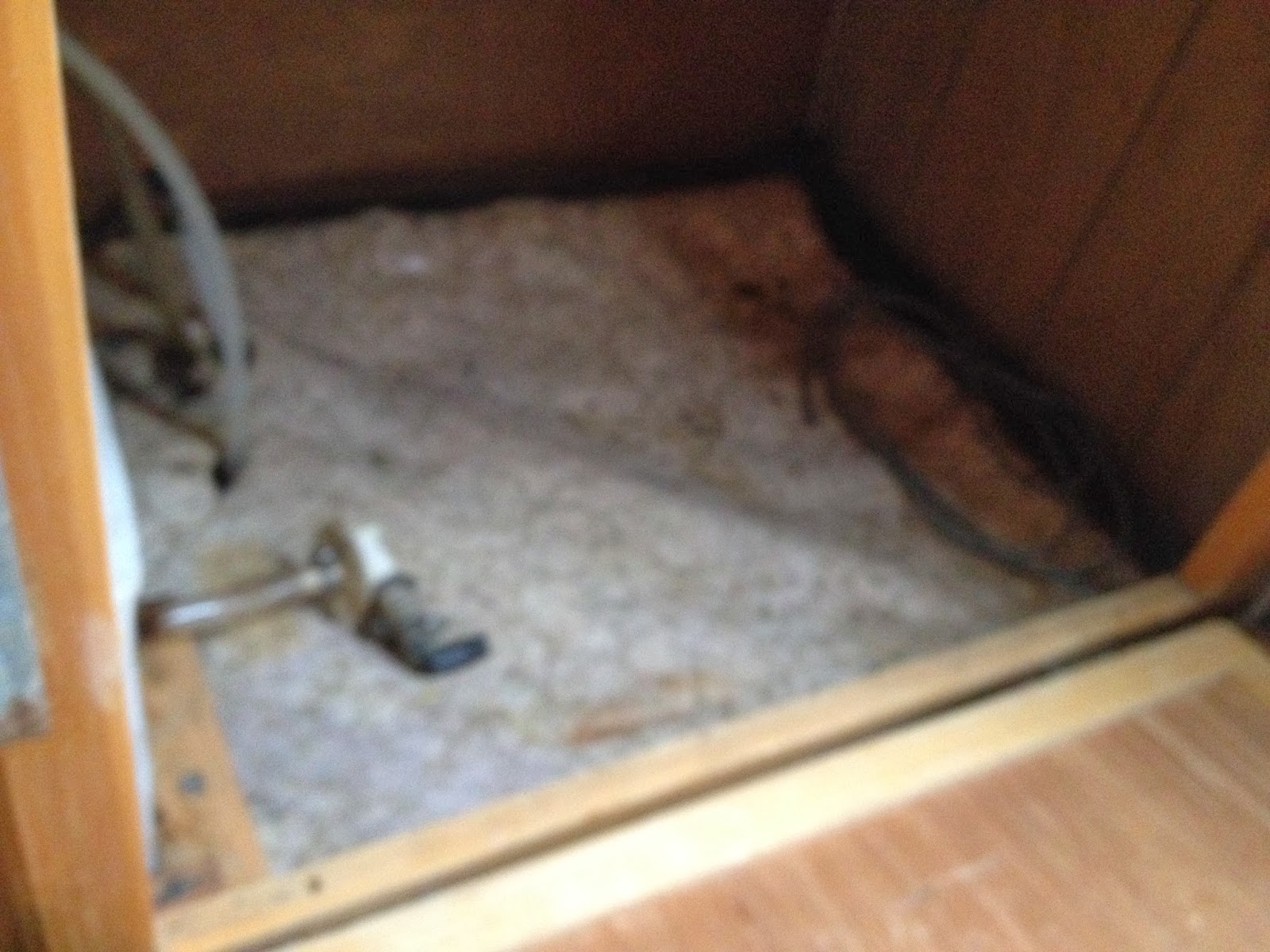 Inside a cubby, right by the front door, the warped vinyl gave away just how much water had entered this part of the trailer. The flooring was soft and rotted from the front corner back. 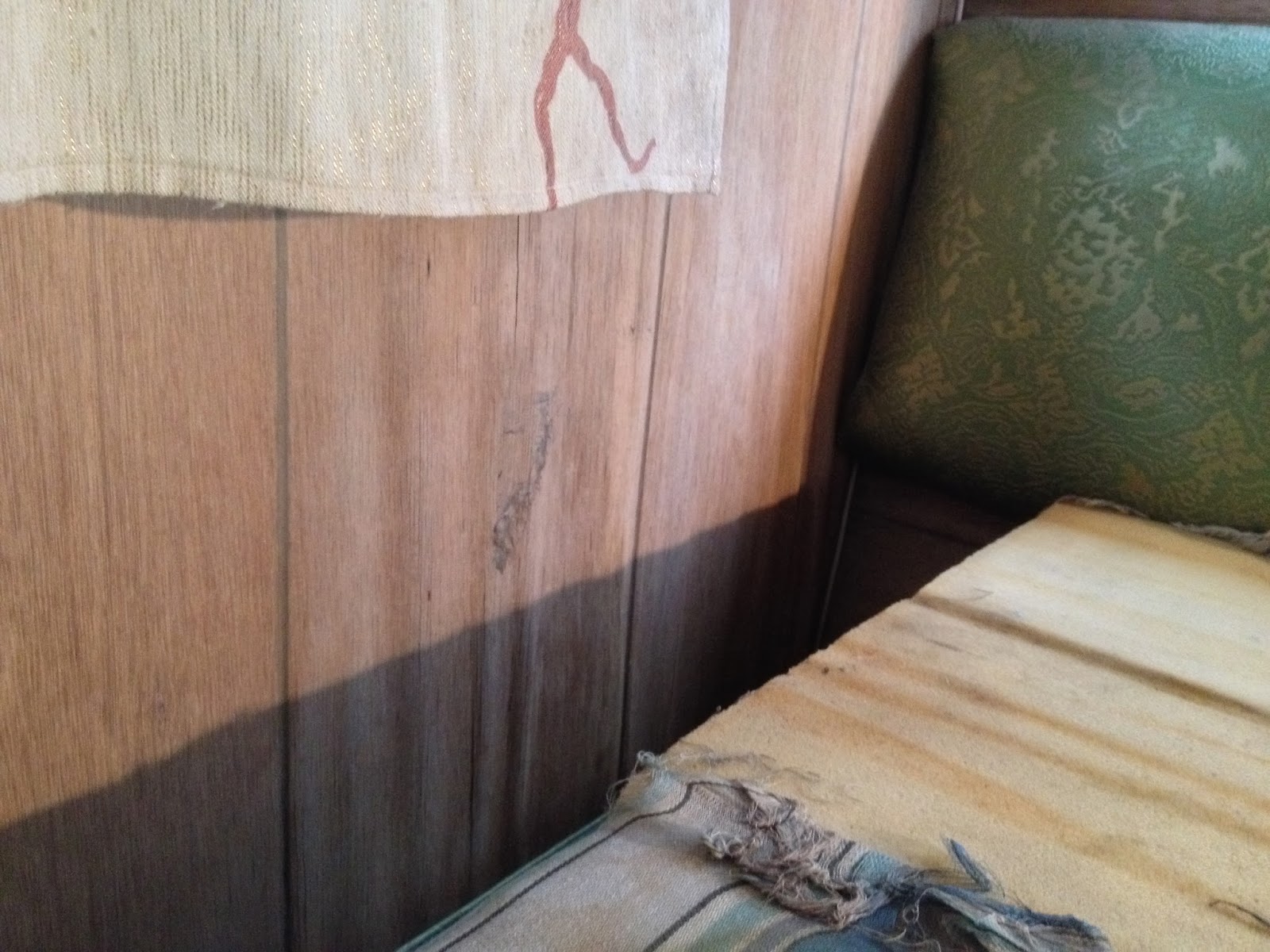 This is the interior wall beneath the window with the missing rain rail. I pulled the wall cushion back to reveal the warped paneling. (Always pull those cushions back, by the way; they can cover up significant damage.) Warped paneling is the result of water damage. 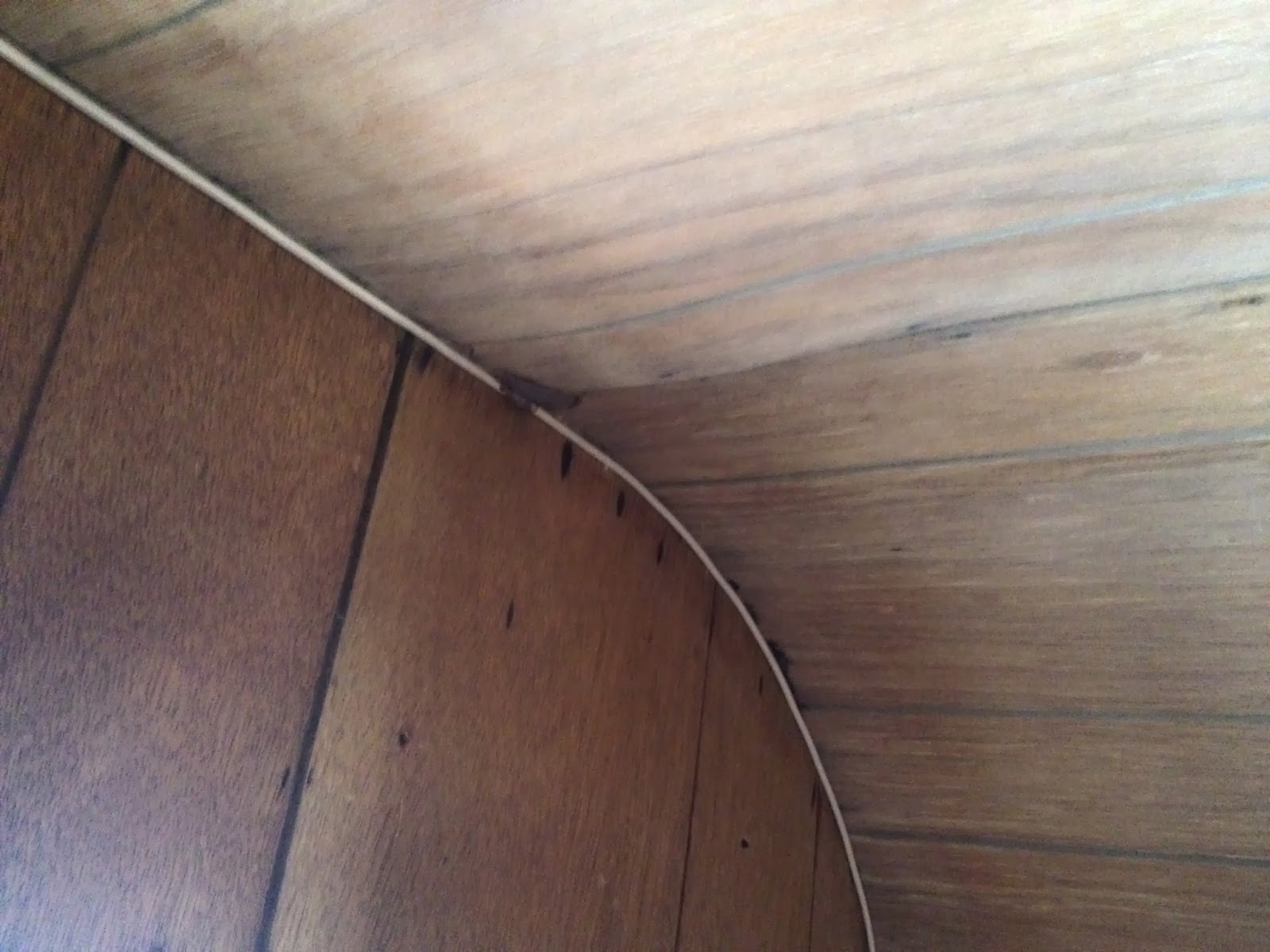 Remember the front exterior corner with the cracked layers of caulking? This is the interior of the same spot. It's inside a dark closet--where it could be overlooked by someone during her haste to buy. 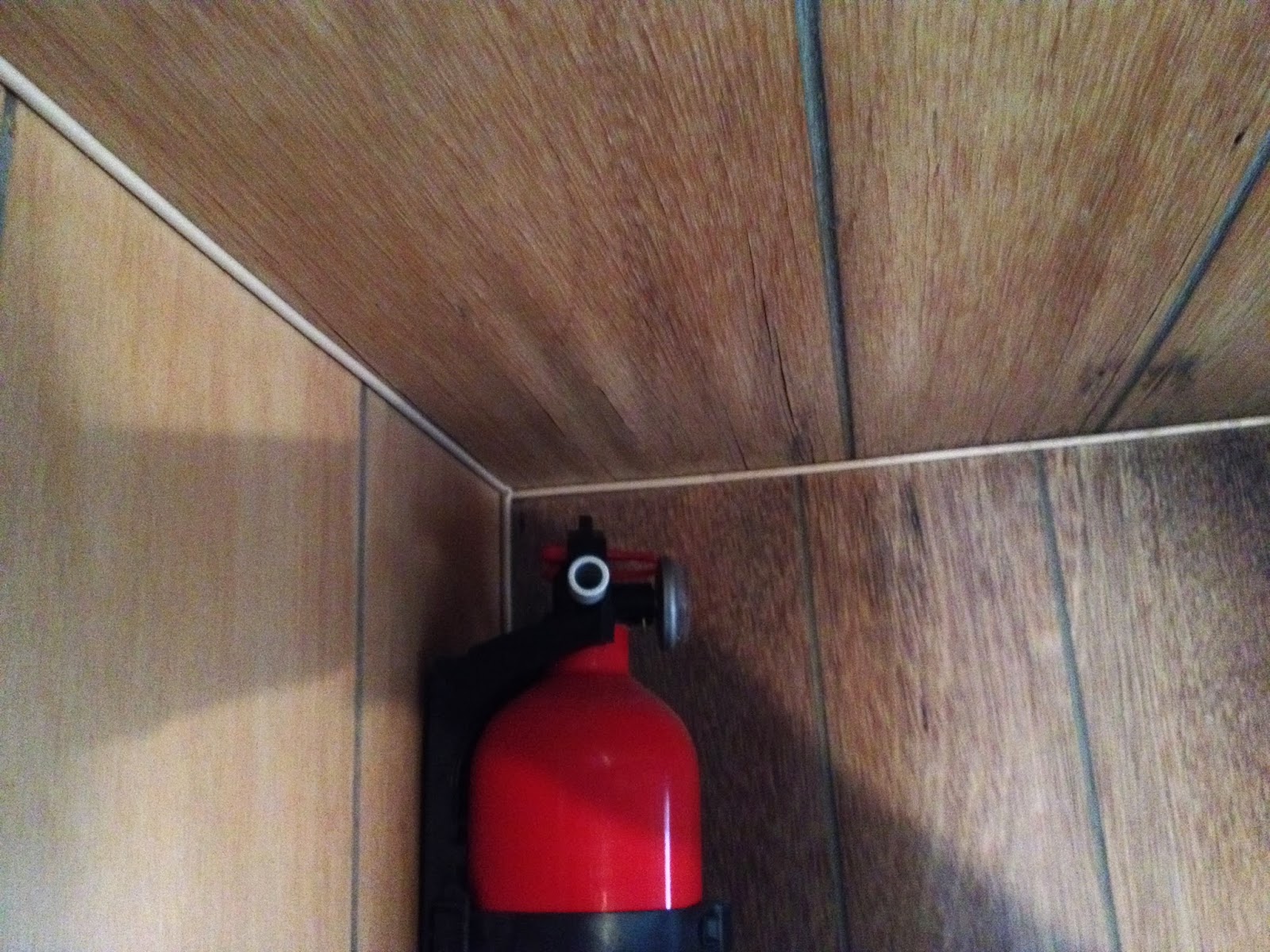 The other end of the closet had leak evidence, too.

Had I been looking for a tear-down project at a salvage price, that would have been one thing. But having seen what a trailer's frame looks like when there's this much water damage visible inside, I couldn't find the value in the owner's asking price--or even half the asking price.

Without dissing his trailer in any way--never necessary, and not cool--I thanked the owner for showing it to me, said it wasn't quite what I was looking for, and wished him good luck with his sale. 'No problem, ' he said. 'Three other people wanted me to call them back if you didn't take it.'

By the time I got home later in the afternoon, his ad had been taken down. Someone else had purchased it.

Which just goes to show, there's a trailer out there for every owner, and an owner for every trailer.

And, I hope this also goes to show that it's always best to see a trailer with your own eyes before you commit to buy it. This seller knew how to hit all the right description-buttons in his ad ('new tires, ready to go camping'), and with his photos of the trailer's good features. But the total package didn't pencil out.

Posted by Girl Camping Girl at 8:12 AM 7 comments: