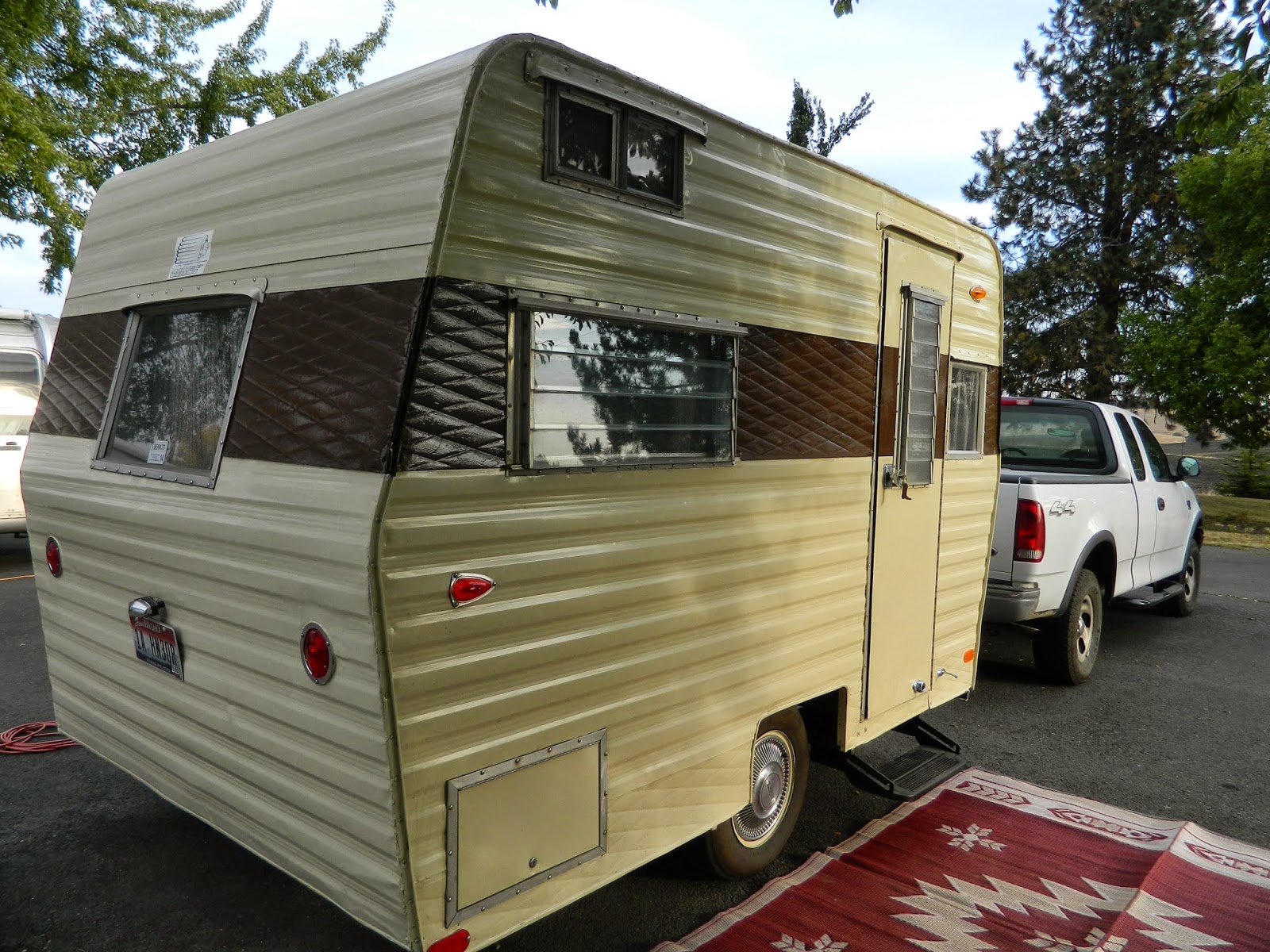 I've been into the vintage-trailer hobby long enough to know a good buy when one comes along.

Which explains why I jumped on this 1965 Chief when it came up for sale. The rehab work was already done, and the price was more than reasonable. All I had to do was hook it up, bring it home, and move my own things into it.

The trailer came with a Western theme already started, including tooled-leather fabric on the cabinet doors and chamois-leather used as valances. Seeing as how my blood type is C, for Cowgirl, I knew I would have no trouble furnishing it to my liking. 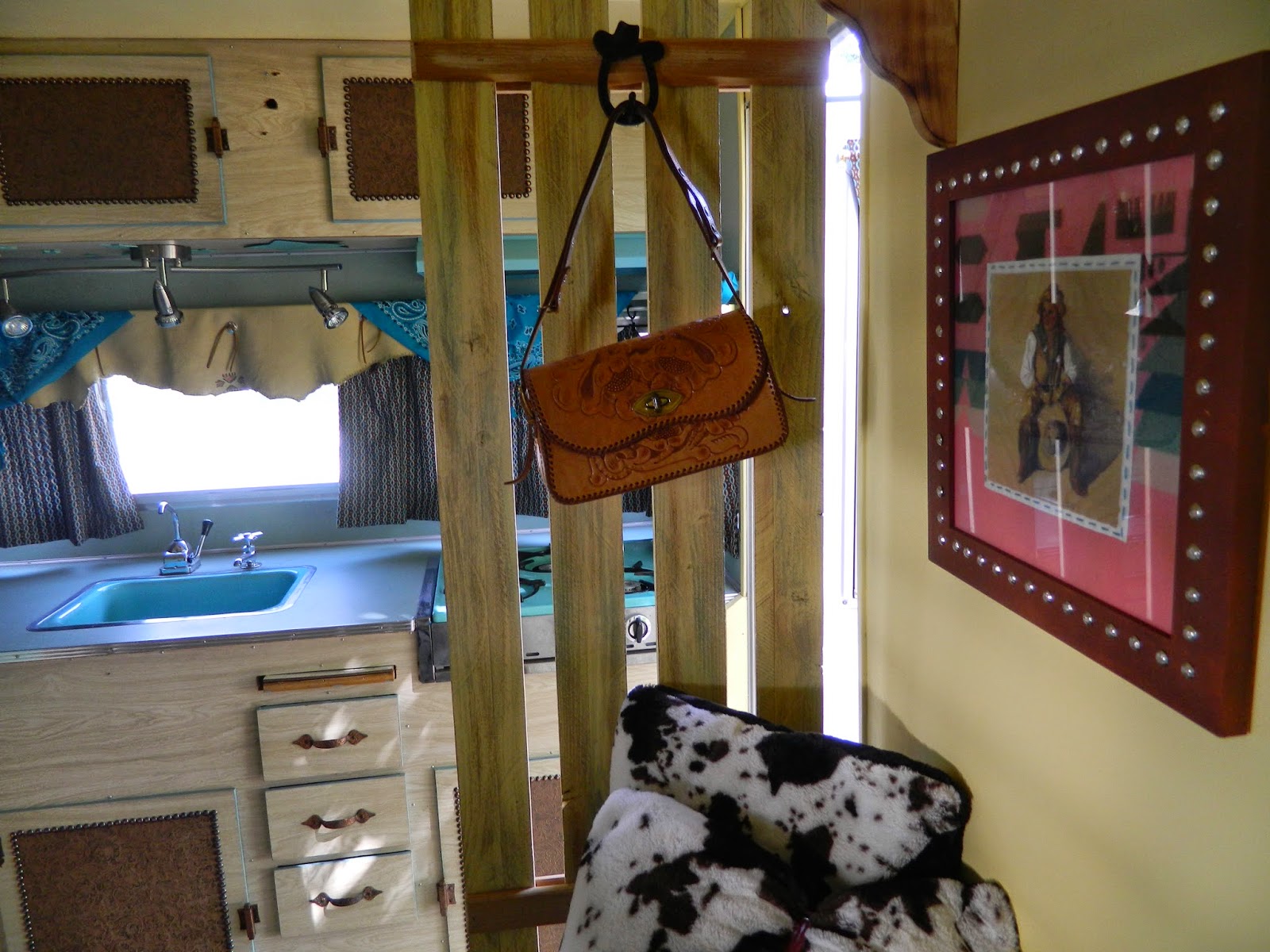 The Chief's kitchen is in the front. True to the trends of 1965, the appliances are turquoise, and the cabinetry has blond veneer. 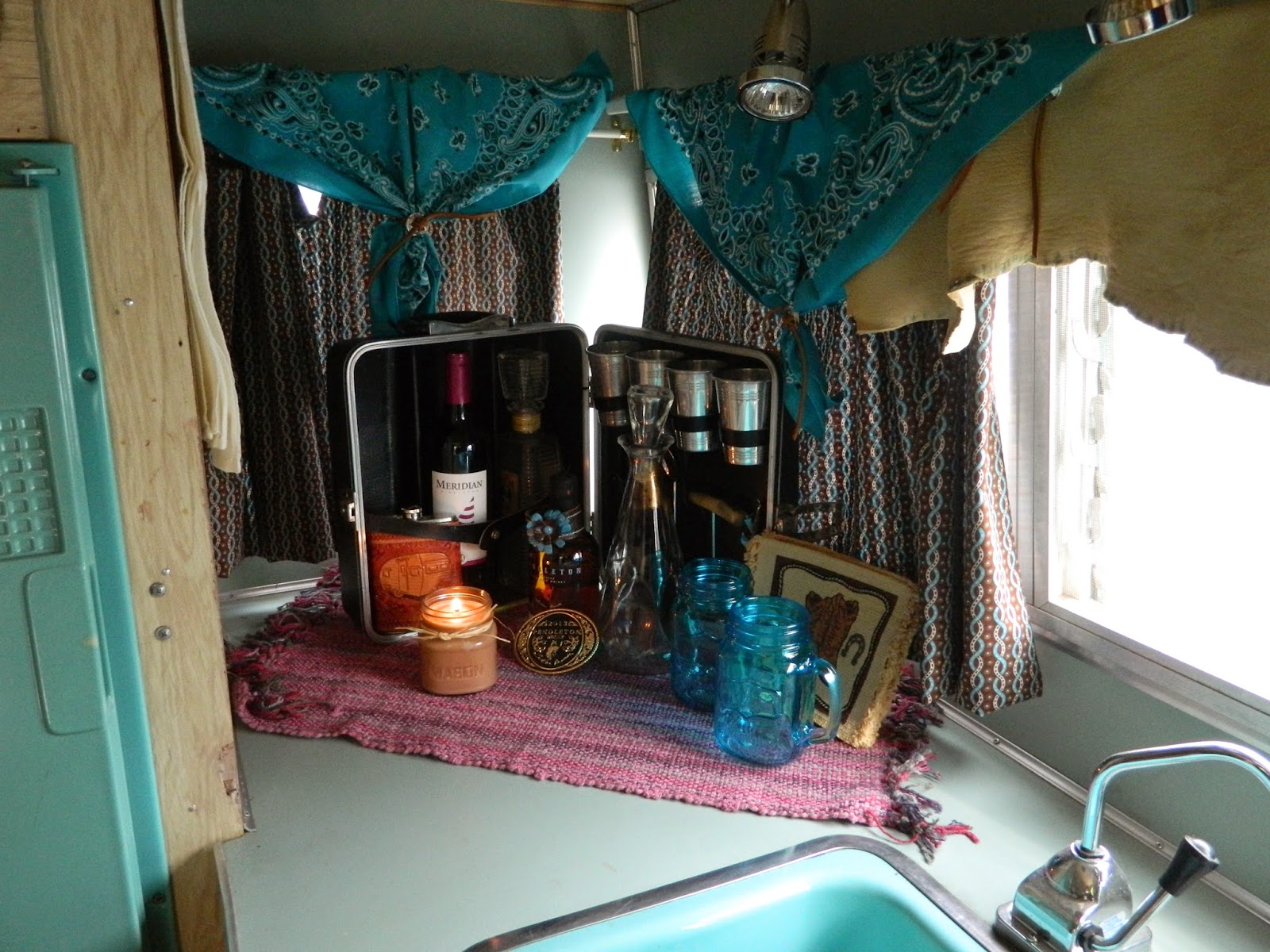 There's a nice nook of counter space to the left of the sink. It's just the right size for a small dorm fridge, should I choose to use one. At present, I'm using the space as a bar. 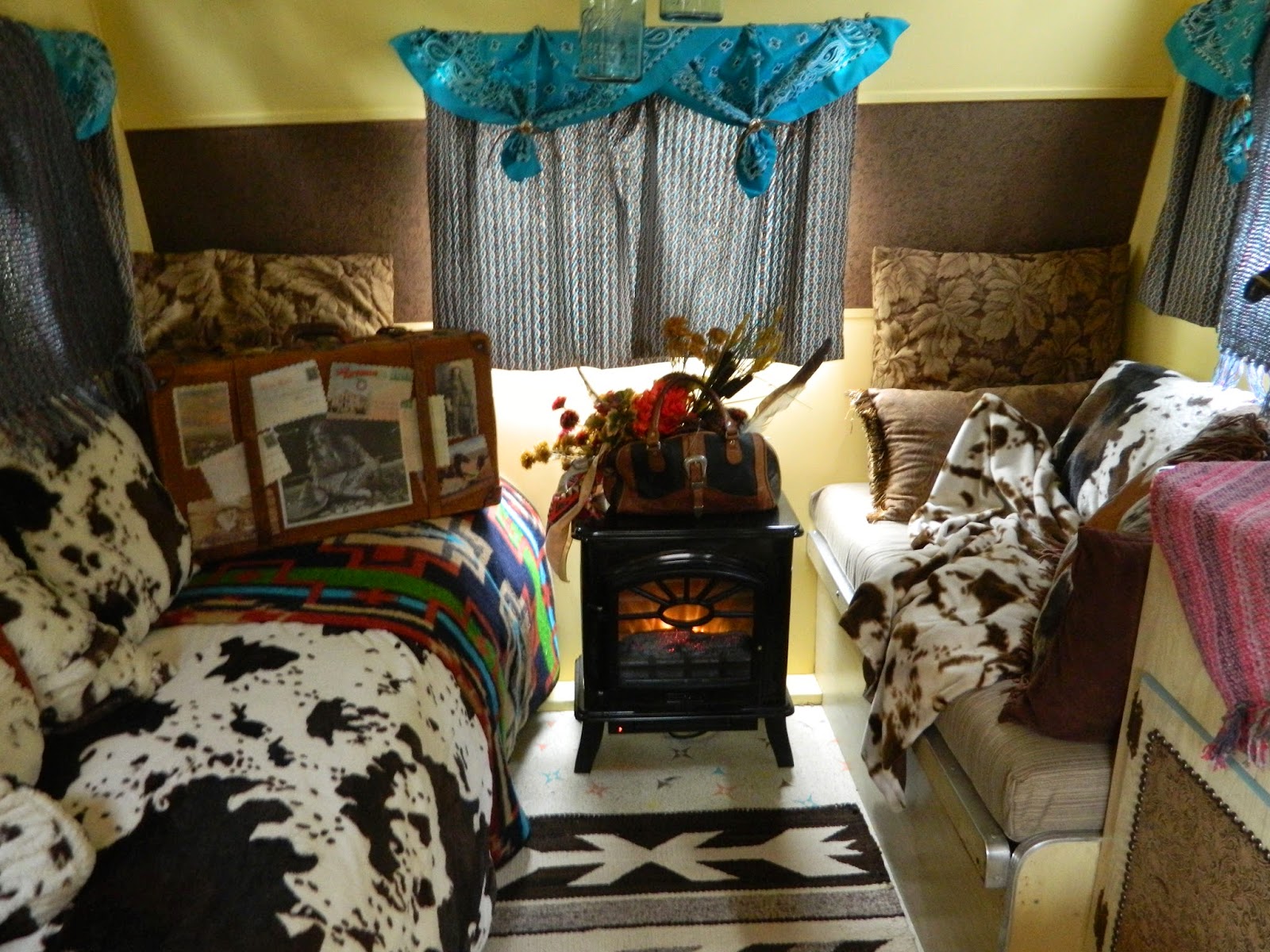 The rear of the trailer features an unusual layout, with a full-length gaucho-bed along the curb wall, and a shorter, kid-length gaucho-bed on the other. Both pull out from the wall. There's plenty of room for my favorite accessory, an electric mini-fireplace heater. 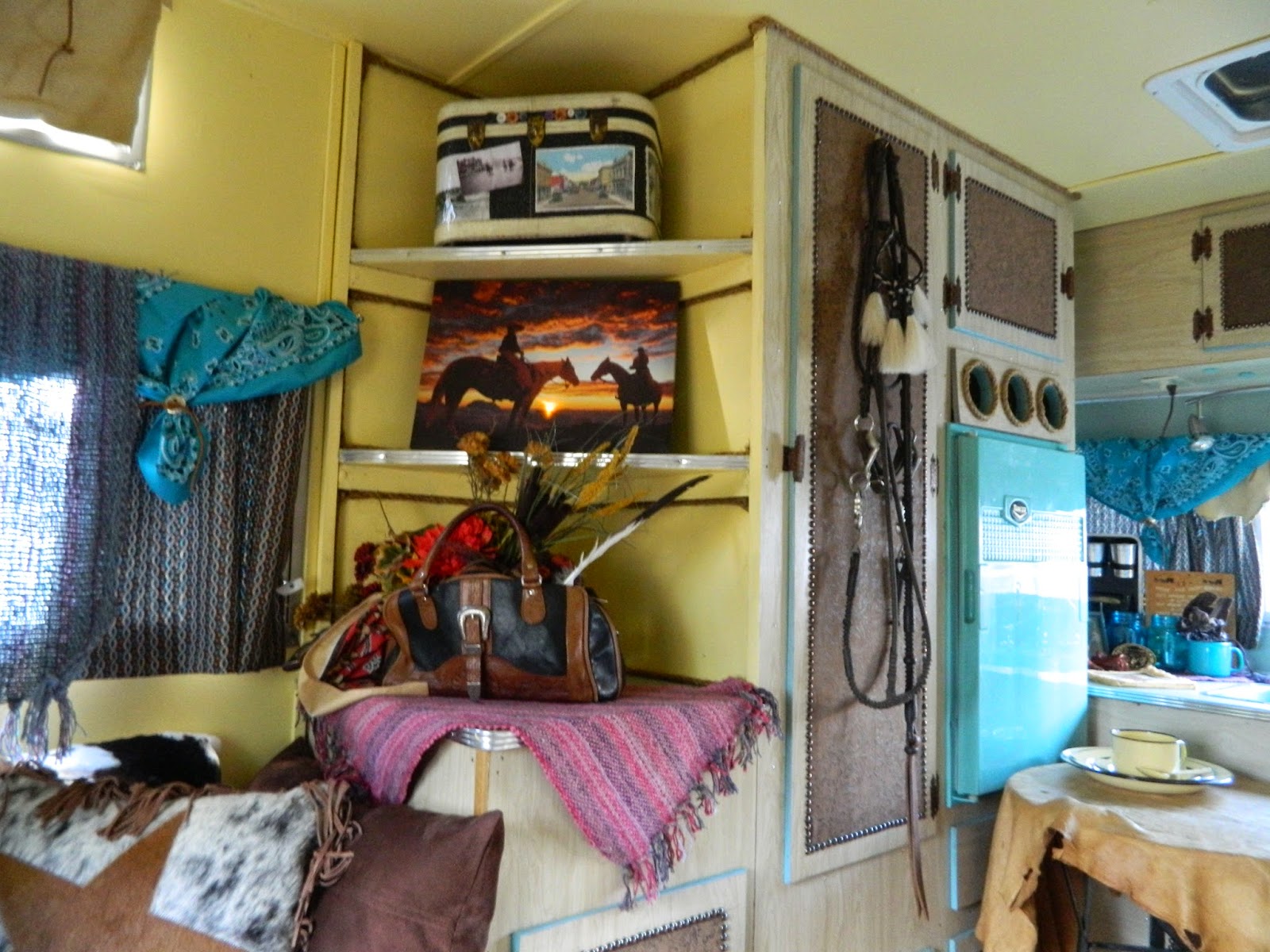 Another element of the unusual layout is the shelving nook in place of an enclosed cabinet. The previous owner trimmed it out with rope, for a nice Western touch. 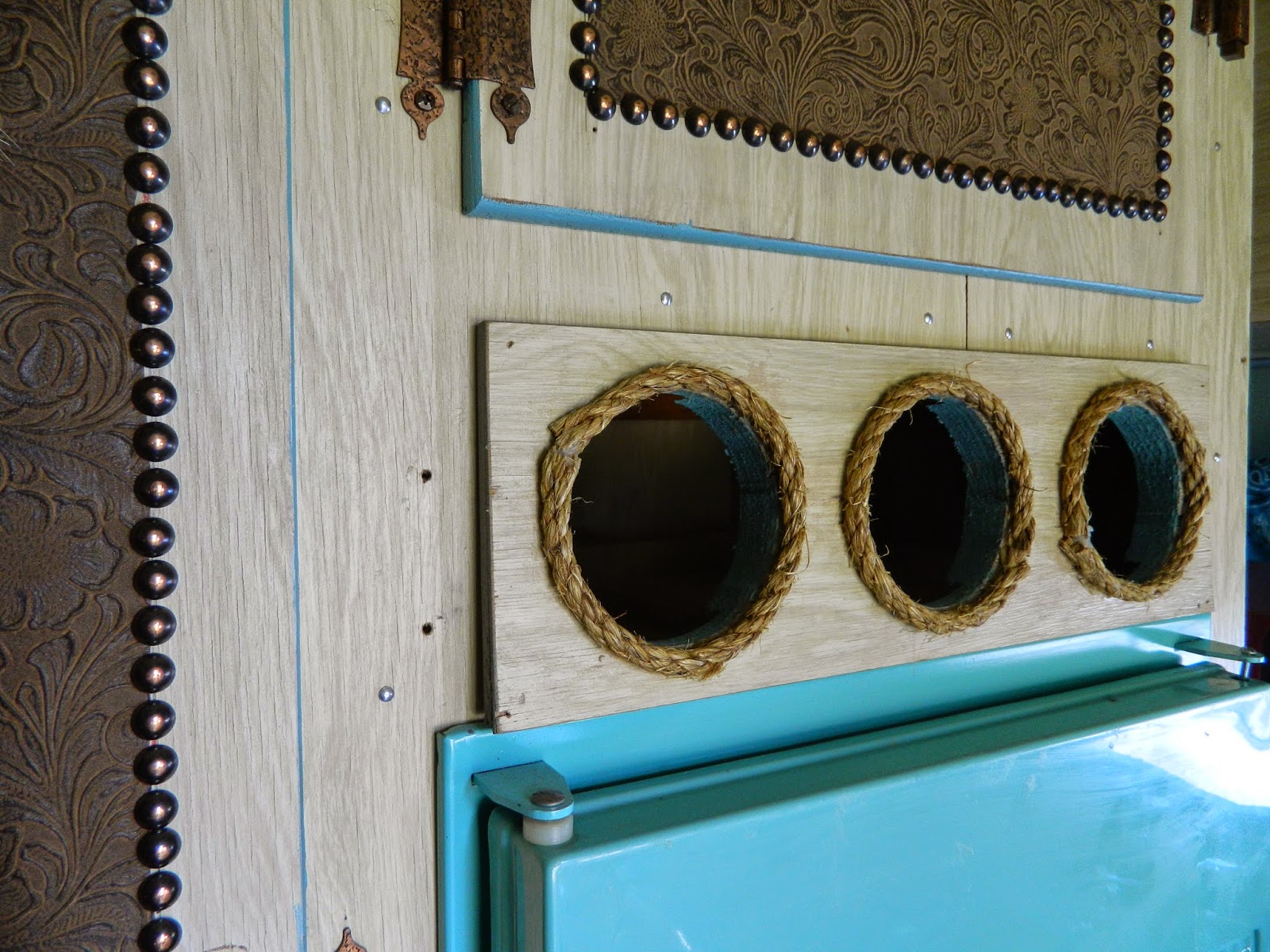 What used to be a divided utensil drawer above the turquoise icebox has been converted--ingeniously--to a 3-bottle wine rack. The drawer front was removed for the holes to be cut, then trimmed with rope. It was then nailed back over the opening. 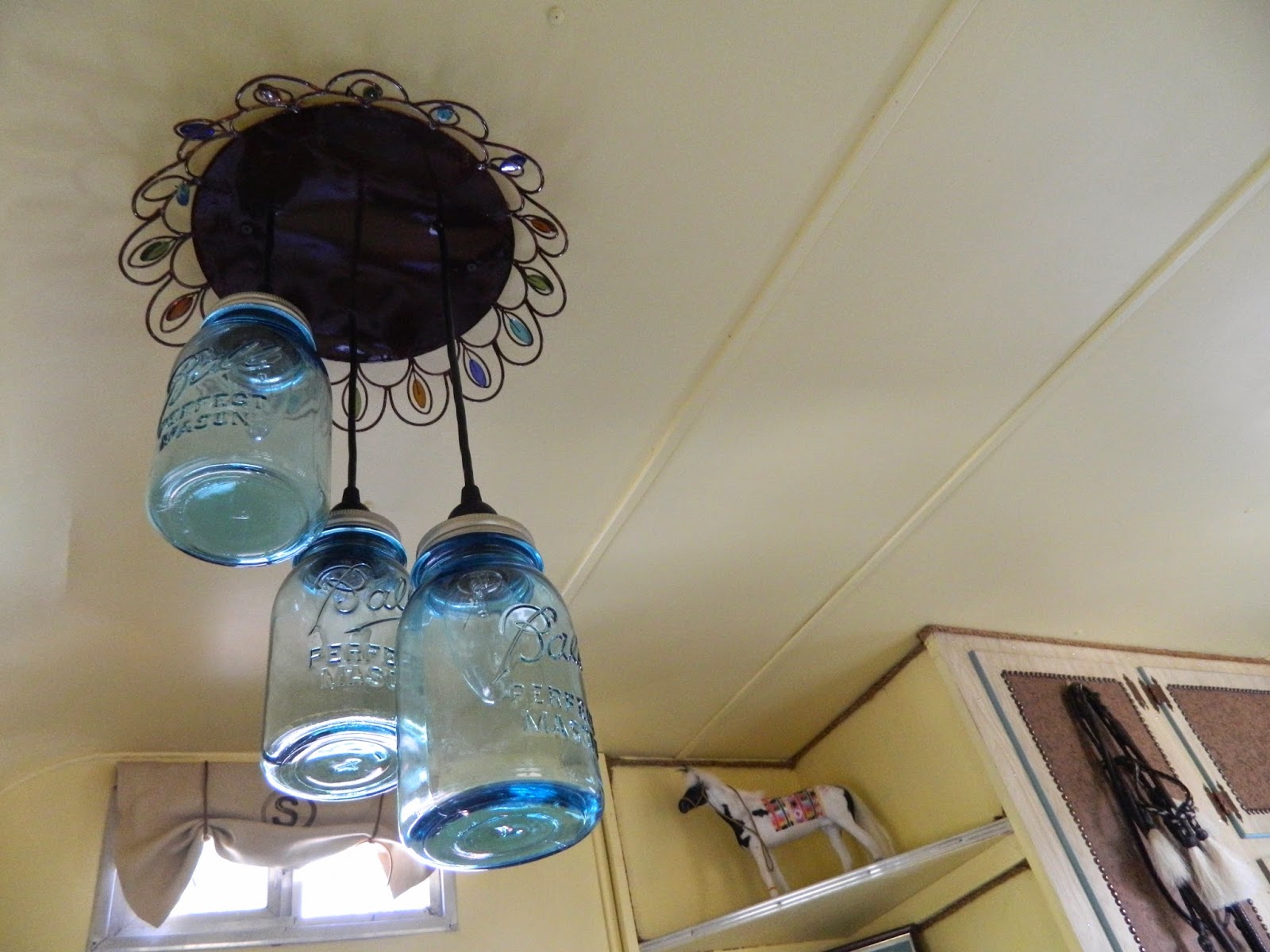 The original rear-ceiling light fixture was replaced with this homemade chandelier that uses vintage canning jars as the light globes. 'From something I saw on Pinterest,' I was told. The jars unscrew for safekeeping when the trailer is in transit. 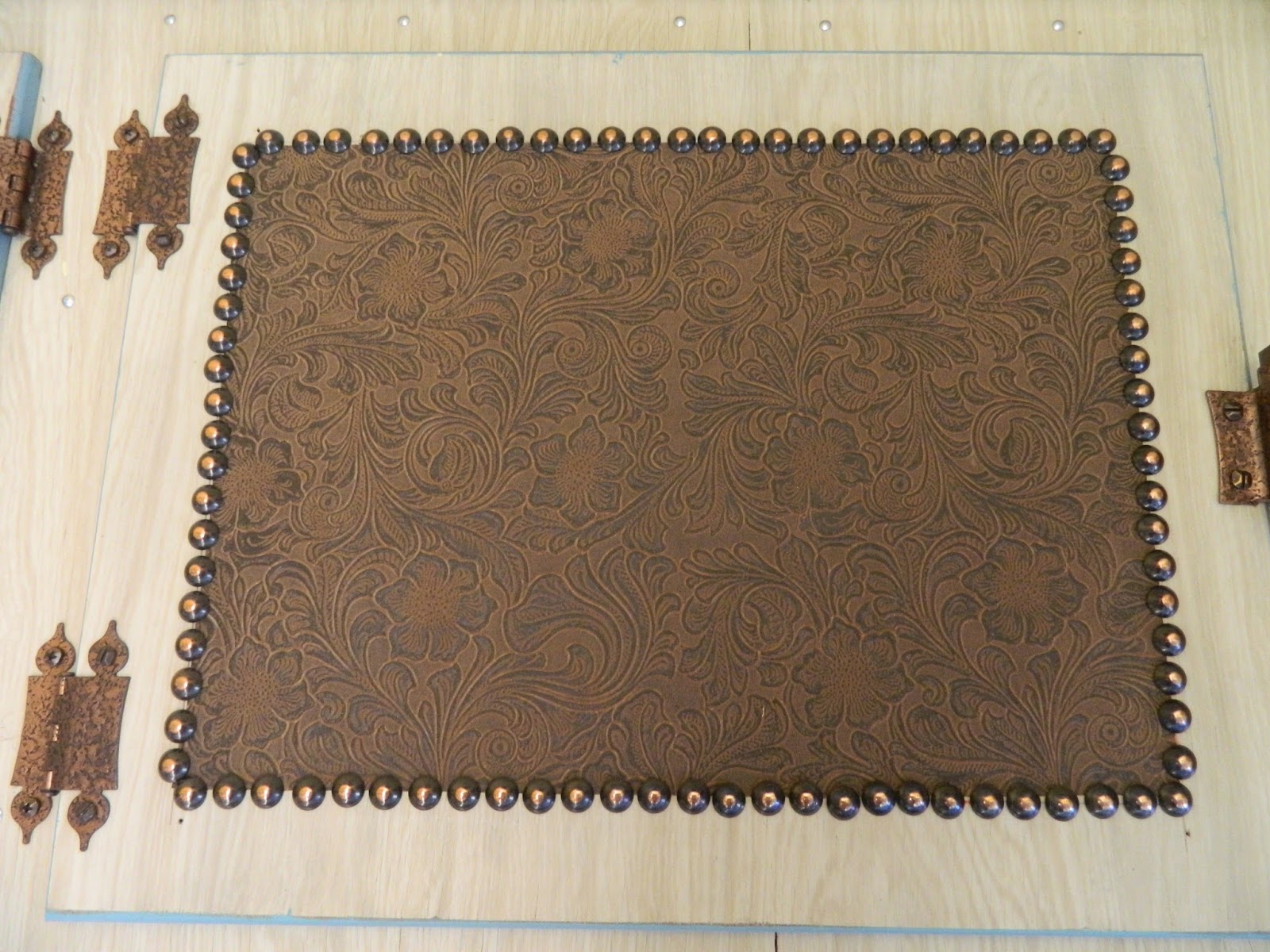 Here's a closeup of the faux-tooled-leather treatment on the cabinet doors. The edges are trimmed with upholstery nails; the tooled-leather fabric is widely available (at Joanne's and WalMart, for instance). 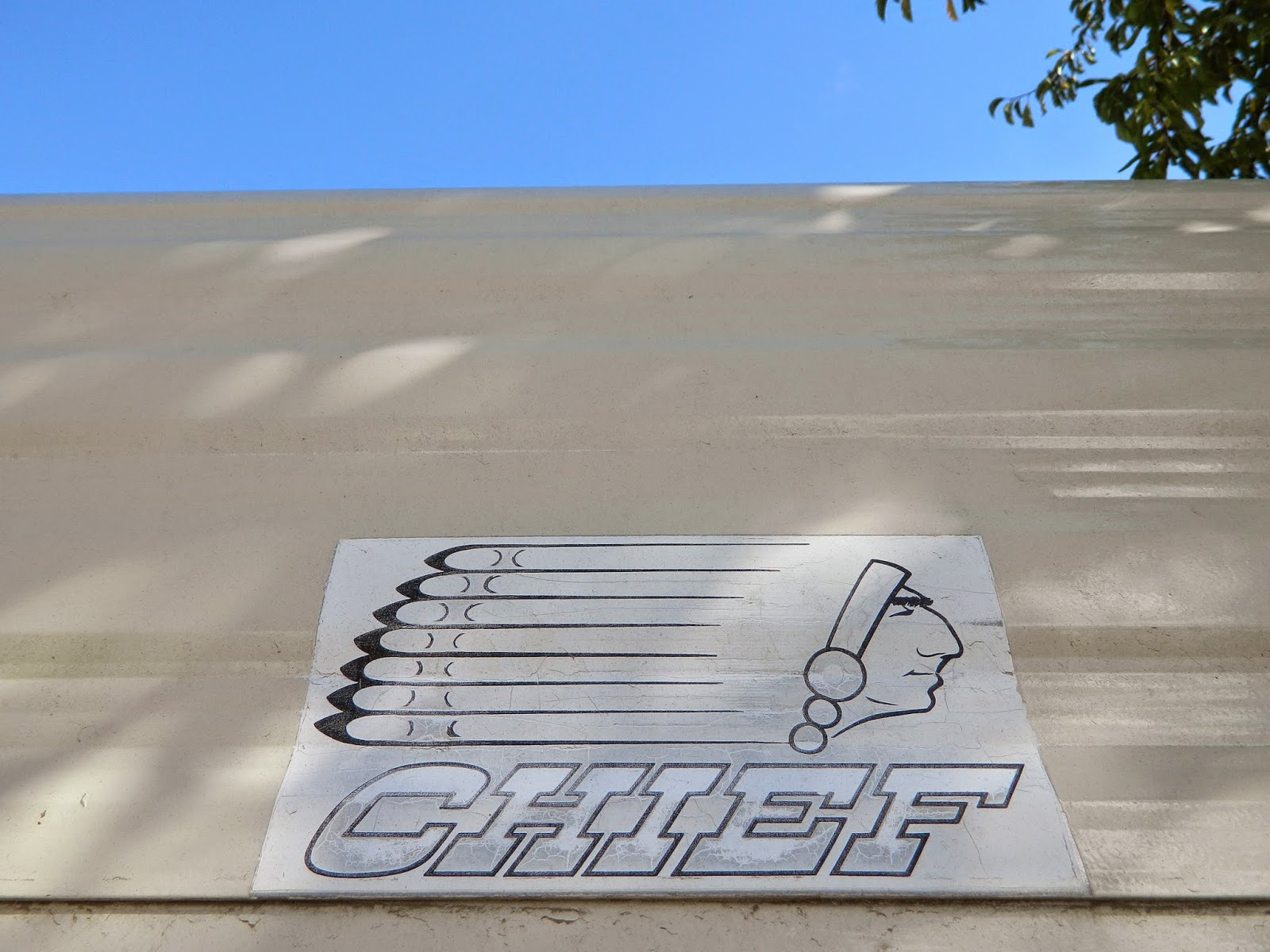 A real chief's name seemed appropriate, so I settled on Crazy Horse. 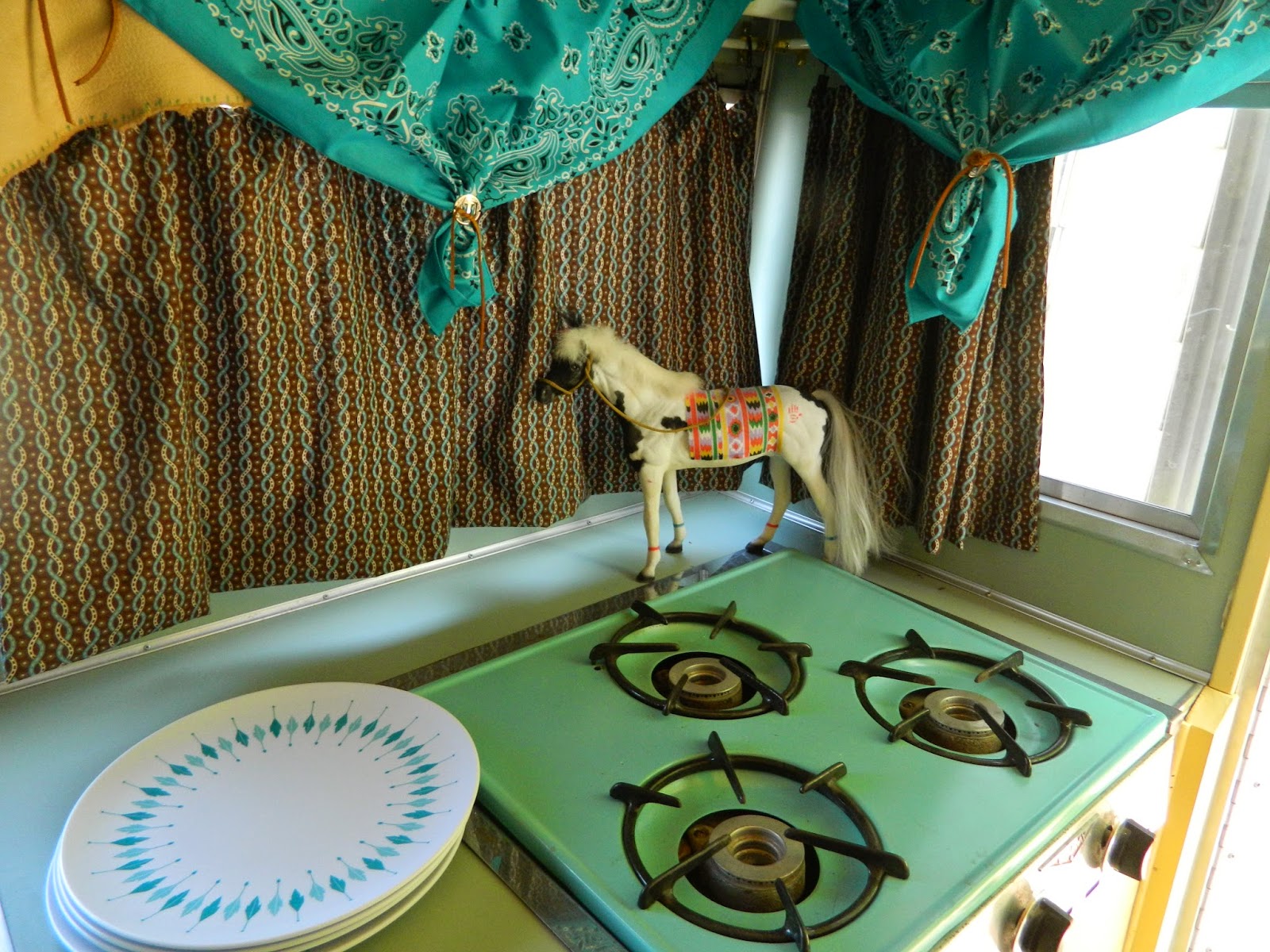 It's a just-right new home for this crazily painted horse figurine, and my stash of turquoise-feather melamine dinnerware.